"Each time a person stands up for an ideal or acts to improve the lot of others... he sends forth a tiny ripple of hope...
​that can sweep down the mightiest wall of oppression and resistance."
​
-— Robert F. Kennedy

To Repair the World: Becoming a
​Human Rights Defender

Whether you are teaching about the Holocaust and Genocide Studies, the oppression of the African American slave trade, the struggles of Native Americans to maintain their culture and land, or the Armenian genocide of the early 20th century, it is important that your students examine role models from a variety of historical situations. In an age of standardized testing and data-driven instruction, it is important that we as educators provide examples of role models who saw injustice and resisted it, inspiring our students to do the same in their communities, nation, and world. 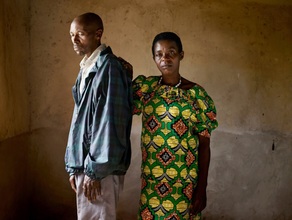 Jean Pierre Karenzi (Perpetrator) & Viviane Nyiramana (Survivor) -Portraits of Reconciliation, New York Times
Print out the resources for the case studies you wish to use (linked in the above section). Set up stations around your classroom for each case study. Divide students into groups of 5 for each station. Have your students divide up the documents from the case study among their group and read their assigned documents. We have created a worksheet that connects each case study to the material discussed in the Power Point about the 8 Stages of Genocide. The front side of the worksheet asks students to evaluate their documents and to then discuss their findings within their group. The back side of the worksheet asks students to write an essay about a human rights defender from their case study.

Step 4: What can students do?

Several organizations specifically target the survivors of these atrocities and your students can further take action for a specific group, especially among the more contemporary situations. Register your class for From Kids to Kids- an informal pen-pal project with students in Darfur organized by the Darfur Peace Fund.


Have your students visit the visual and oral histories at the University of Southern California’s Shoah Foundation, documenting the Holocaust, the Cambodia Genocide, Genocide Against the Tutsi in Rwanda, the Armenian Genocide, the Guatemalan Genocide, the Nanjing Massacre, Anti-Rohingya Mass Violence, Northern Syria, and Contemporary Anti-Semitism. ​